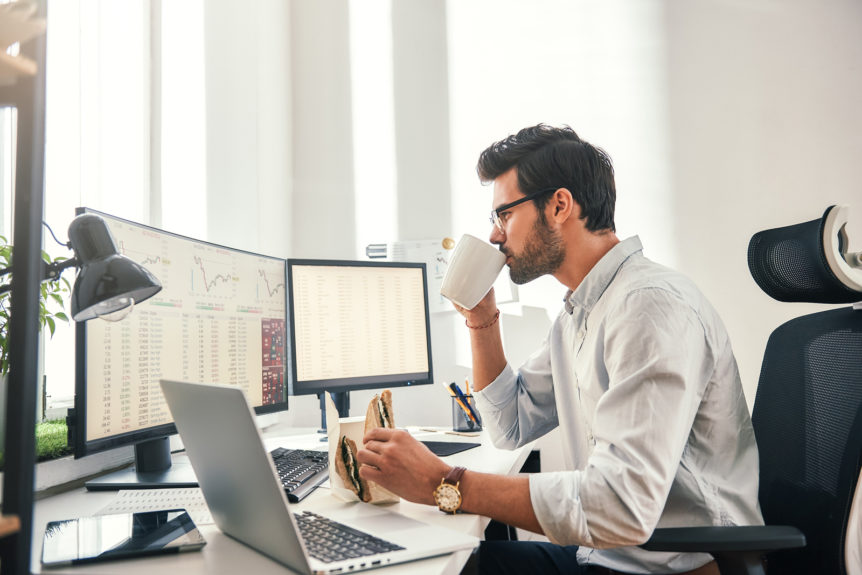 By now, we all know that eating healthily and taking care of ourselves at work is important for both our personal and working lives. However, new research has found that the majority of the UK workforce are cheating themselves when it comes to their hour lunch break.

According to the London Economic, the study found that despite workers being given a full hour for lunch, the majority of workers will only spend a quarter of an hour to eat. Almost half also eat their lunch at their desk, leading the researchers to coin the phrase ‘eating al-desko’.

When it comes time to stretch your legs, only 15 per cent are heading out of the office after their desk lunch, and even more worryingly, as many as three-quarters of respondents to the study said they often eat while working through their lunch break.

A quarter said that they are too busy to enjoy a proper lunch, as they have to take care of personal errands and admin during that time, while one in eight said they have to spend too much time prepping their lunches.

Jennifer Shepherd from Quorn, which commissioned the research, hopes that the information brings home that there’s more out there to explore when it comes to eating lunch at work: “A third of lunchers are looking for more variety and 40% said they are looking for no compromise healthy.. options,” she said.

The study also found that 47 per cent are bored with their lunch – is it time to ditch the packed lunch sandwiches and call in some catering talent?

The loss of the one-hour lunch break, however self-imposed, all featured in another workplace survey this week, according to The Mirror, but this time all about the features of the workplace from yesteryear that today’s workers miss.

Asking over 2,000 workers over the age of 40, the study revealed six out of 10 thought that work was ‘easier’ in previous decades. That work-free hour lunch break, being able to leave on time without feeling guilty and being able to disconnect form emails at the end of the day all feature high on the list of the charms of working back in the day.

Geoffrey Dennis, chief executive of animal charity SPANA, which commissioned the research to highlight the plight of working animals, said that it was clear that: “older workers are nostalgic about the past and a time when work felt less stressful.”

When it comes to lunch breaks, workers over 40 miss the days when they could go to the pub with coworkers too, as well as lamenting their 15 breaks that were allowed in the morning and afternoon.

Looking for a Yorkshire catering company at the moment? Get in touch with us today.